Certain events over the last couple of weeks seem to have coalesced to bring about this post. Some time ago we received Father Prior’s “Benedictine Approach to the Use of the Internet & Social Media“; shortly thereafter our reading of the Introduction to the Devout Life brought us to the chapters on conversations and detractions; this past week saw some celebrations of the vetus ordo at the Fatima shrine, the main celebrant being a well known American cardinal. The flood of invective on Portuguese social media on the part of the laity and, even worse, priests has brought all the more to mind St. Benedict, St. Francis de Sale and Father Prior’s words on silence.

Perhaps it is the age we are living in, or perhaps it is just my impression, but it seems that we live in a time when most people seem to be very opinionated and they make a fact of letting everyone know their opinions whether others want to know them or not. Yet looking to the Holy Rule for guidance, what does the Holy Patriarch have to say about much speaking? In Chapter VI, after quoting the Scriptures St. Benedict puts the matter quite succinctly:

[I]f at times we ought to refrain from useful speech for the sake of silence, how much more ought we to abstain from evil words on account of the punishment due to sin.

While the Rule is essentially directed at those living the cenobitic life, general rules can be taken from it that can be applied to the lives of those of us living in the world, as D. Mark Kirby shows the aforementioned commentary. One of the verses of Sacred Scripture that I am most reminded of is

In the multitude of words there shall not want sin: but he that refraineth his lips is most wise. (Prov 10:19)

Looking back at St. Benedict’s injunction to refrain from talking even for “useful speech” through the lens of Proverbs 10:19, I can look back at everyday situations in my life where conversations (be they in person or online) that start out innocent enough many times slowly begin to degrade: a complaint is made here, a fault of another is revealed there, and the conversation suddenly snowballs, leading either one or both parties to murmuring, sinning against charity, etc. And this is not even when the conversation has started off maliciously! On those occasions where one happens to be caught in a situation of gossip, I have found that if one doesn’t extract oneself immediately then one is easily sucked into a whirlpool of complaint, detraction, etc., even if one was initially unwilling to join in at all.

Where in the Scripture we find admonishments to be on guard against the tongue, in the age of the internet and social media, we can easily substitute the word fingers/keyboard for tongue. I find that the anonymity and instantaneousness of the internet exacerbates all the more absences of charity, especially among those who are our brothers in Christ.
As to the anonymity, how easy it is to say something without having to take responsibility for the consequences. With much of the invective one finds online, I oft ask myself if those comments would be made in person, if they would be said to the offended party’s face. I’m inclined to believe that they would not. In this case, it is easier to act in a cowardly fashion, hiding behind a screen, without giving a care to the consequences. The internet also allows for “echo chambers” of sorts”, leading one at times to have an exaggerated opinion of one’s own worth and ideas.
As to the instantaneousness, much of social media seems to be based on reaction: pictures or words are posted and we are invited to “react” to them, many times not giving much thought at all, and simply moving on to the next stimulus. With Tweets, for example, communication is severely hampered by the limited amount of text one can type, and things can easily be misconstrued. One reads something that stirs up anger and immediately the fingers are firing away at the keyboard, sometimes faster than thoughts have time to form, and before one knows it Enter has been clicked and a volley of poisoned darts has been sent directed at some perceived enemy.

It seems to me that the inability to keep silent and rash judgments  go hand in hand. St. Francis de Sales gives several reasons as to why one might be inclined to rash judgments: out of a bitter nature; out of pride; out of an inclination to relish in the imperfections of others; to justify their own conduct, in the hopes that “the multitude of offenders makes their sin less blameworthy”; out of pleasure taken in conjecturing in regards to others’ interior lives; following one’s feelings. To remedy rash judgments, says St. Francis de Sales, one needs drink from “the wine of charity”. The saint here is merely rehashing what the Scriptures tell us, that “charity covers a multitude of sin” (1 Pt 4:8; Prov 10:12). If, as the saint has shown, rash judgments are the fruit of disordered passions, then ordered passions will lead to temperate judgments and, a fortiori, charitable passions will lead to charitable judgments. “The just man,” says St. Francis de Sales, “when he can no longer excuse either the deed or the intention of him, whom, moreover he knows to be a good man, yet will not judge him, but puts the matter out of his mind and leaves the judgment thereof to God.”

Going back to the Holy Rule, looking at the Chapter IV we find among the instruments of good works the following:

And how does St. Benedict recommend we acquire the charitable spirit necessary for these works? Again, in Chapter IV:

42 -To refer what good one sees in himself, not to self, but to God. 43 – But as to any evil in himself, let him be convinced that it is his own and charge it to himself. 47 – To keep death before one’s eyes daily. 48 – To keep a
constant watch over the actions of our life. 49 – To hold as certain that God sees us everywhere.

St. Benedict tells us that we need to see the truth about ourselves (and one does need to ask for this grace), that we are not special, that we are not extraordinary, even if we may think we are above other men; that we need to be vigilant always. It is too easy to not keep watch, to slip into complacency, especially with a comfortable lifestyle. Anyone, if they’re honest enough, will admit to this. And this isn’t a modern phenomenon – read any monastic author or the Fathers and they will mention that a comfortable life makes one soft and weak, hence one of the reasons why some form of ascesis is needed. 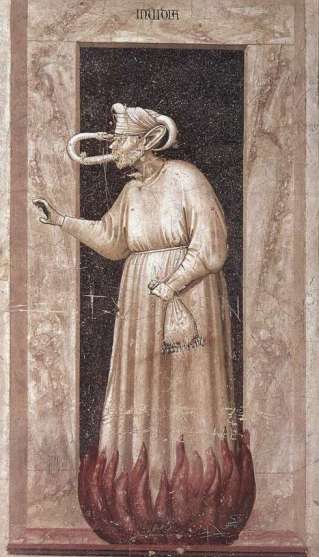 [T]he detractor, by a single stroke of his tongue, ordinarily commits three murders: he kills his own soul and that of who listens to him by a spiritual murder, and he takes away the social life of him whom he defames[…]

Notice that it’s not just the one defaming that sins, but the one who consents to hear as well! The chapter has many insightful things to say, such as being careful not to give a person a certain title simply because we have observed them at one time committing a certain act because “one single act does not give the name to the thing.” Hasn’t it happened to us at some time or other, for example, that we see a colleague at work not doing their job and automatically think “look at this guy; they’re not working – they’re lazy” and we don’t give a second thought as to why they might not be doing their job at that particular instant. We are warned not to draw “any conclusion for today from yesterday, nor yesterday from today, and still less for tomorrow” because “it is the last day that judges all.” St. Francis says that we can speak of a person having done such-and-such in the past, or that they are doing it now, but that is it – we are Christians and believe that all men, if they cooperate with the graces God gives them, can convert and be made anew. The greatest proof of that sometimes is as easy as looking in the nearest mirror. 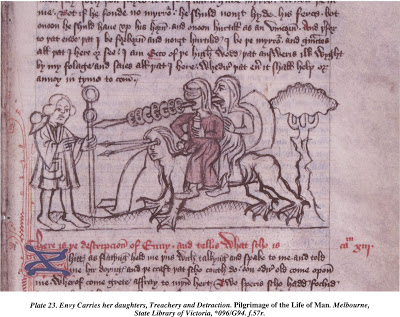 Finally, coming back to the online comments I read concerning the American cardinal, I have to ask – what do they say about our spiritual lives? What do they say about the shepherds that engage in such vitriol against their fellow priests and sometimes even against the sheep in their flock? Do we give any thought about our brother, whom we claim to love so much, when we fill their eyes and minds with vicious words, inciting them to propagate the same inflamed passions? And on other occasions, if we are correct, are we “speaking the truth in charity”? Can non-believers read what we Catholics write online and hear the words of Christ, or do we condemn ourselves and disfigure the one whom He presents to Himself without blemish? Do we crucify Him again and again every time we go online? It’s worth stopping to consider next time, before pressing Enter, if I have written charitably. Do I really need to write that witty remark? Do I really need to write anything at all? Should I even be reading this or searching for these kinds of things?

And if any man think himself to be religious, not bridling his tongue, but deceiving his own heart, this man’s religion is vain. (James 1:26)

3 thoughts on “Set a watch, O LORD, before my keyboard”