Today I return to a theme I touched upon some time ago and which, even though I never got back to it, has been lingering in my mind. The Gospel pericope from two Sundays ago brought it to the fore once more, particularly this bit:

Jesus came, and stood in the midst and said to them: Peace be to you. And when He had said this, He showed them His hands and His side. The disciples therefore were glad, when they saw the Lord. He said therefore to them again: Peace be to you.

This Pax vobis, along with the priest’s Pax Domini sit semper vobiscum, got me to thinking yet again about Christ’s peace. While for some time I thought that this might be some kind of interior peace, a kind of absence of struggle, reading the Fathers and the lives of other saints disabused me of such erroneous notions. Having written already about the interior struggle, I won’t go over that again; rather, I would like to focus this time on Christ.
Our Lord, in John’s Gospel, gives the Apostles His peace both before His betrayal (in the context of the institution of the Eucharist) and after His resurrection. In the context of the Mass the Pax comes right after the embolism, and before the Agnus Dei: both are entreaties to be free of sin. In the old rite, when the Pax is given, it descends from the altar – which is a figure of Christ as well – being given hierarchically as well as mediated. 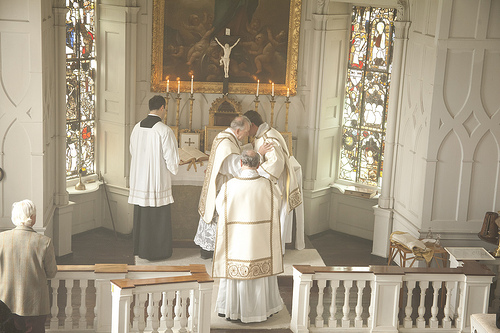 So what is this peace that Christ gives us? It is His salvific work, it is redemption. In short, it is the peace between God and Man, the broken relation having been restored.

We read in St. Paul:

And through Him to reconcile all things unto Himself, making peace through the blood of His Cross, both as to the things that are on earth, and the things that are in heaven. And you, whereas you were some time alienated and enemies in mind in evil works: Yet now He hath reconciled in the body of His flesh through death, to present you holy and unspotted, and blameless before Him [..] (Col. 1:20-22)

Being justified therefore by faith, let us have peace with God, through our Lord Jesus Christ: By Whom also we have access through faith into this grace, wherein we stand, and glory in the hope of the glory of the sons of God. (Rm 5:1-2)

For if, when we were enemies, we were reconciled to God by the death of his Son; much more, being reconciled, shall we be saved by his life. And not only so; but also we glory in God, through our Lord Jesus Christ, by Whom we have now received reconciliation. (Rm 5:10-11)

For He is our peace, who hath made both one, and breaking down the middle wall of partition, the enmities in His flesh: Making void the law of commandments contained in decrees; that He might make the two in Himself into one new man, making peace; And might reconcile both to God in one body by the cross, killing the enmities in Himself. (Eph. 2:14-16)

It is through Christ that Man can finally be at peace with God, that Man may be God’s “friend” once more, as it was in the beginning, when they walked together in the Garden. His peace is the shedding of His precious Blood, as the Paschal Lamb, which keeps the exterminating angel at bay, returning to us life everlasting; it is the outpouring of water from His pierced side, by which one crosses from the land of sin and death into that of milk and honey and life. 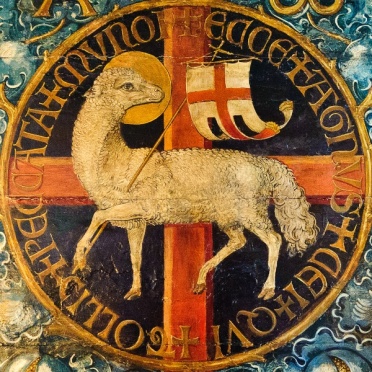 Christ’s peace is the foundation of all the Instruments of Good Works, but I think especially of the last one – to never despair of the mercy of God. Being at peace for the Christian is not some inner feeling of tranquility or of stillness; it is not even being at peace with oneself. I would go so far to say that if one is at peace with oneself, if there is no inner struggle, then something is not right. As said above, peace for the Christian is being reconciled to God, it is living in a way that Christ lives within us. We should never despair of the mercy of God because Christ has bridged the chasm; He has redeemed us from bondage; He has manifested the Father’s hesed, His charitas towards Man. This is something worth meditating during Paschaltide.