Today I offer a final collection of loose thoughts on my retreat at Silverstream.

Before going I inquired of friends and acquaintances if there were any intentions they would like me to bring before Our Lord while on retreat. I was quite surprised at the amount of prayer requests that I received. “If I, being a simple, sinful layman, am asked to pray for all this, then how much more are those in the religious life solicited!”, I thought to myself. These requests brought to my mind another aspect of the communion of the saints which I normally don’t associate too much with the concept – the communion of those here below, in the Church Militant – and the power of intercessory prayer. I often tend to forget that if any prayer I offer is efficacious, it is not on any of my own merits, but on account of my participation through Baptism in the Death, Resurrection and Ascension of Our Lord.
As I came before the Eucharistic Face, bringing Him all these pleas, enjoining to them my own prayers, I was reminded of what I once heard from an anchorite: that a man at prayer is an awesome and terrible thing to contemplate. At that moment I was, in a sense, an icon of all those who had entrusted me to “deliver” their prayers. How could the crushing weight of such a responsibility not bear down upon me? How could I not be reminded of my unworthiness, of my failings, of my sins? How could I not think of my need for conversion of life? There, before His burning sacramental gaze, I felt small, humbled, speechless. Carried away by this feeling, the only appropriate response (when I was alone in the oratory) seemed to be to prostrate myself before the King of kings. 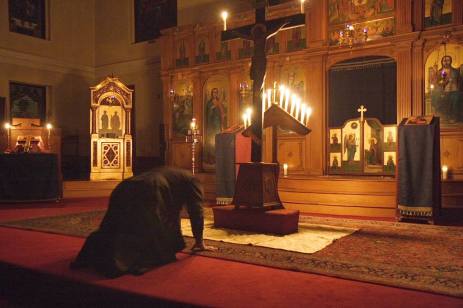 There were (many) times during adoration that my mind would wander, sometimes for quite a bit, until I finally realized that it was no longer present and so I would focus again on where I was, with Whom I was. These constant distractions made me wonder if I wasn’t actually wasting my time. After all, I would start off by presenting all the intentions, I would say some prayers for myself and my family, and then I was left with that feeling of my own littleness, of having nothing to say. I was not doing anything. Yet I took to heart what we had been reading in In Sinu Jesu as pertains to time before the Blessed Sacrament, so there I remained. Do not think from what I wrote above that mine is a bleak, gloomy and cold spiritual life. Though the joys of sensible consolations are now years behind me, I stayed at adoration out of fidelity. I stayed to “keep watch” with Him, to offer Him my time and my presence. I stayed to bask in the warmth of the fiery furnace of His pierced Heart, that He might slowly burn away the dross in mine. I stayed, silent, ear of the heart attentive, hoping to hear the precepts of the Master. 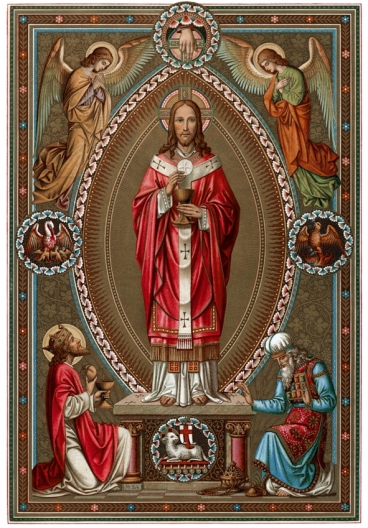 On the day of my arrival the Mass celebrated was that of Our Lord Jesus Christ, Supreme and Eternal High Priest. Two of the prayers from that Mass caught my attention. The Collect for this votive Mass is:

O God, who for the glory of Thy Majesty and the salvation of the human race, didst establish Thine only begotten Son as the supreme and eternal Priest: grant that those He has chosen to dispense His mysteries may prove loyal in carrying out the ministry they have received. Through the same Jesus Christ[…]

Now here is a prayer to pray for our priests, especially in these troubled times. The prayer, in good Latin fashion, is quite to the point. It reminds us that it is Jesus who chooses His priests, that vocations really are callings – His calling. With a vocation, the initiative belongs to the Lord; we simply respond (or not) to it. In the case of the priesthood, this prayer shows us that He chooses His priests just as He chose the Apostles, to be His ministers. The prayer displays its “Roman realism”: it dispels any notions of automatic impeccability for those who enter into the religious/clerical life. If the prayer asks God to grant that His priests may be faithful, it is implied that there is a chance they may be unfaithful. One need look no further than one of the Twelve whom Our Lord called before His Passion, Judas Iscariot. He calls, but grace must be cooperated with. Without Him we can do nothing. What has recently transpired is proof of this.

The Secret has this to say to us:

O Lord, may our Mediator Jesus Christ make these offerings agreeable to Thee: and along with Himself may He offer us to Thee as a thank-offering: Who with Thee liveth[…]

The Latin speaks of offering us as “hostias” – victims – along with the Pure, Holy and Immaculate Host. How often do we go to Mass failing to realize that we go to offer ourselves upon the altar; that, just as wine and bread are transformed upon the altar into the Body and Blood of Our Lord, so we too are there to be transformed? A monk once shared the following reflection with me:  the moral law is, in a sense, for “ritual purity”. We are homo liturgicus – we were made for liturgy. We follow the moral law so that we can “stand in the house of the Lord, in the courts of the house of our God.” Will we offer ourselves an impure, unholy and maculate host?
We are offering ourselves, mediated by the priest, per ipsum, et cum ipso et in ispo. Even in the Mass, making the words of the Canon our own, we are searching for the face of the Lord, hoping that He will look upon us as favourable offerings:

Upon which vouchsafe to look with a propitious and serene countenance,[…]

Our lives, be we laymen or religious, is a constant seeking of the Face of the Lord. We seek His Face so that we may one day speak to Him as friends do. We ask Him to convert us, to turn our face to His, so that we may be saved.

One thought on “Ostende faciem tuam”