As there is an evil zeal of bitterness which separates from God and leads to hell, so there is a good zeal which separates from vices and leads to God and life everlasting.  Let monks, therefore, practice this latter zeal with most fervent love: that is, let them in honour anticipate one another; let them bear most patiently one another’s infirmities, whether of body or of character; let them endeavour to surpass one another in the practice of mutual obedience; let no one seek that which he accounts useful for himself, but rather what is profitable to another; let them practice fraternal charity with a chaste love; let them fear God; let them love their Abbot with a sincere and humble affection; let them prefer nothing whatever to Christ; and may He bring us all alike to life everlasting. Amen.

This past Lent, with the “crashing and burning” of my intentions during the very first week (and then just a few weeks later again), made me keenly we aware of my lack of “good zeal”, especially that which “separates from vices”. Saint Augustine’s prayer, in his great work “The Confessions”, is somewhat apropos:

Grant me chastity and continence, but not yet.

I am sure that those who have been in bondage to some vice for years on end – be it anger, lust, greed, gluttony, etc. – will recognize themselves in the saintly bishop of Hippo’s prayer. How many times have we prayed to be delivered from our particular vice(s)… only not just yet. How many times have we prayed half-heartedly, desiring freedom, but loving the chain even more?

Augustine reveals how vice enslaved him:

My will was the enemy master of, and thence had made a chain for me and bound me. Because of a perverse will was lust made; and lust indulged in became custom; and custom not resisted became necessity. By which links, as it were, joined together (whence I term it a chain), did a hard bondage hold me enthralled. 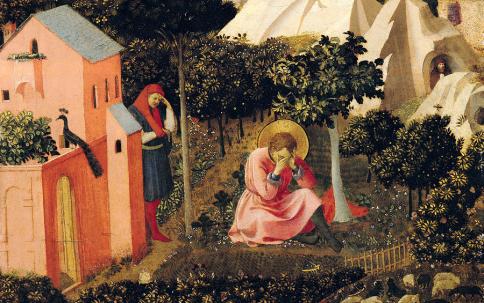 For those of us still fighting against vices acquired so long ago, we can recognize the same path that brought us to our current struggle. Augustine mentions a “perverse will” leading to vice. What does he mean by perverse? Perverse, etymologically, means turned away; therefore, a “perverse will” is a “will turned away”. Turned away from what? Turned away from God, from what is good. We indulge vices not because we think they’re evil, but because we find pleasure in them. We fall into vices because we go after pleasure, which is a false good blinding us to the supreme Good. This lack of zeal which leads to pleasure seeking in vices ultimately leads to death, “for death is close to the entrance of delight.”
We may have stumbled into our particular vice(s) because we didn’t know any better; perhaps there was no one to point us in the right direction; maybe we indulged deliberately knowing it was wrong. Independent of the circumstances that led us to sell ourselves into bondage, what matters is where we are now. If we are living a Christian life, if we are trying to practice virtue and combat vice and asking God for the grace to persevere, then that is what matters. Years, if not decades, of letting vice thrive and enmeshing itself around one’s will are not undone over night (excluding some miraculous intervention). Do we fall? Yes, and we will fall again and again. What matters is that we get back up and make a new beginning until that day when we no longer fall again (which does not mean that we still won’t be tested).

Returning again to the matter of pusillanimous prayer and the subject of good zeal, it dawned on me how little I actually desired the virtue I was praying for. Acquiring virtue is hard, but to practice it faint heartedly makes it an even harder struggle. Perhaps, I thought to myself, more than asking for the grace to persevere in a particular virtue, I should be asking for the desire for that virtue? On the Fifth Sunday after Easter the Collect confirmed this intuition of mine, and I have prayed it as often as I can remember it:

O God, of Whom it cometh that the minds of thy faithful people be all of one will, grant unto the same thy people that they may love the thing which Thou commandest, and desire that which Thou dost promise, that so, amid the sundry and manifold changes of the world, our hearts may surely there be fixed, where true joys are to be found.
Through Jesus Christ, thy Son our Lord[…] 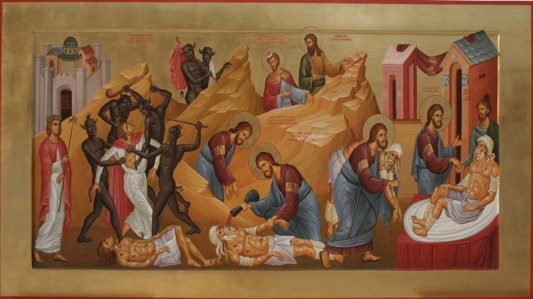 In battling vices one may be tempted to give up, but let us recall the last good work of the Holy Rule – to never despair of the mercy of Christ. He is the Good Samaritan and He will not leave us by the wayside.